Posted on May 27, 2013 by The International Knitter of Mystery

Wednesday found my companion and I splitting up: she left early on a coach tour to Stonehenge and Bath; I headed out for a day sightseeing in London.

If you ever go to London, I highly recommend taking the Tally Ho Cycle Tour. My guide was Jack, and he was knowledgable, entertaining, and pretty darn cute. Extra points for the fact that he said “Crikey!” completely unselfconsciously, adding to the British experience. I rode a 3-speed Pashley bicycle, complete with bell and basket, oddly enough named “Kate Middleton.” I accepted the optional bike helmet, because I knew that, if I were squashed flat by a double-decker bus, the fact that I was a pediatrician riding without a helmet would be in the headline. 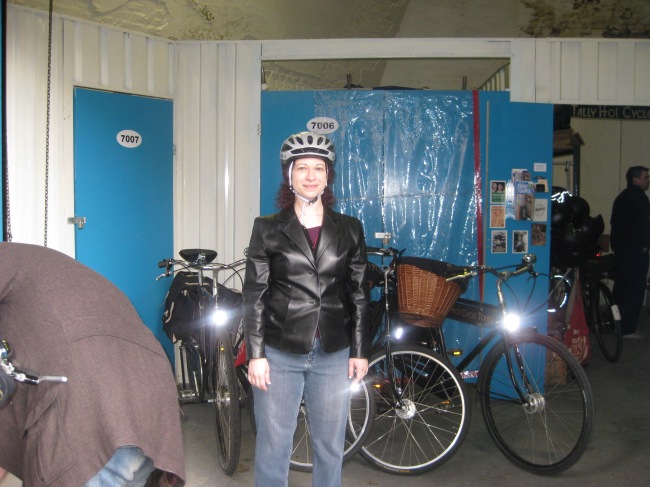 The Tally-Ho tour takes 2-1/2 hours but isn’t physically taxing, as central London is pretty flat. Jack guided his four charges through traffic calmly (he hasn’t lost one yet, he promises), using hand signals to tell us where to go. Starting at The Walrus Bar and Hostel on Lower Marsh Street (near Waterloo Station), the tour covers a lot of ground. Our first stop was at the base of The London Eye, where we found an additional surprise: 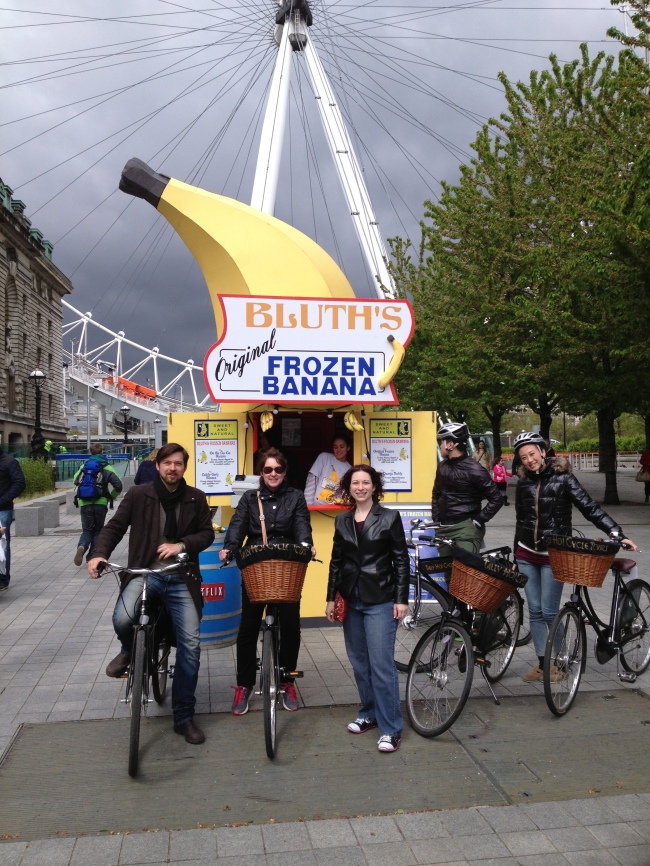 I’ve been told that there’s always cash in the banana stand.

We continued along the waterfront to Lambeth Bridge, where we crossed the Thames, circled “Queen Anne’s Footstool”, evidently passed UKIP leader Nigel Farage and interviewer Cole Moreton, walked our bikes through the Westminster Abbey Precinct’s Dean’s Yard (cars are allowed but bicycles must be walked!), and came out right in front of Westminster Abbey. We then proceeded past St James’s Park (search “pelicans eating pigeons” on YouTube, if you dare!) to stop in front of Buckingham Palace in time to see the guard march away. 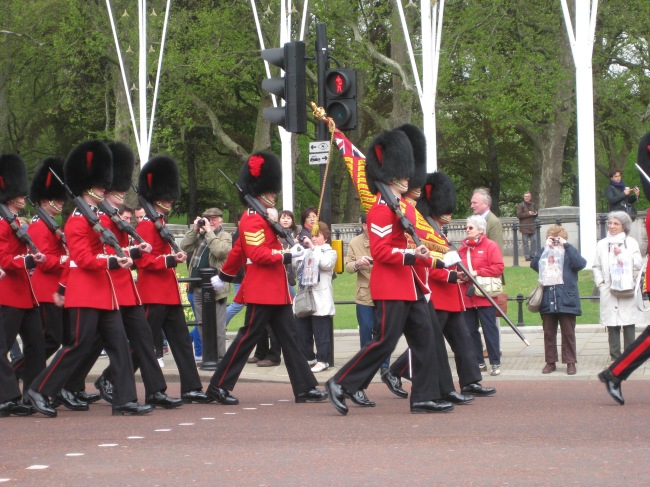 We next stopped by Clarence House (Prince Charles was at home, according to the flag flying overhead). Then we made our way to Trafalgar Square, along the way seeing Wellington’s nose. Not far away is The Harp Pub, a CAMRA favo(u)rite. No time for a pint then – we continued on through Covent Garden Market and re-crossed the Thames over the Waterloo Bridge. We cycled past the National Theatre and the Royal Festival Hall, arriving back at Tally-Ho’s base about 1 o’clock.

Despite being hungry after all that cycling, I was eager to check out I Knit London first, since it was fortuitously only about a block from The Walrus. 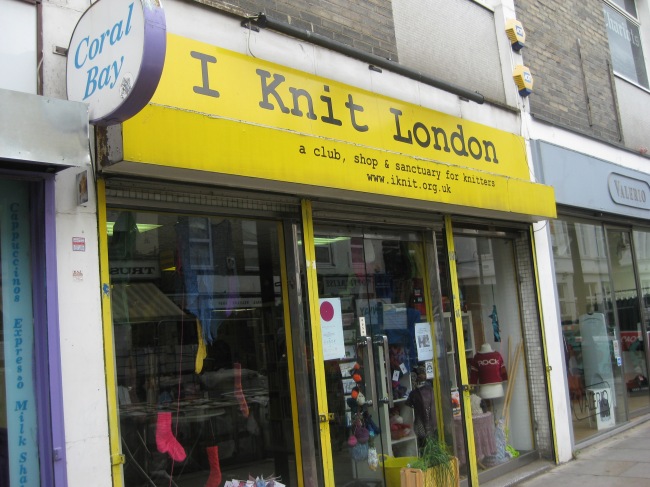 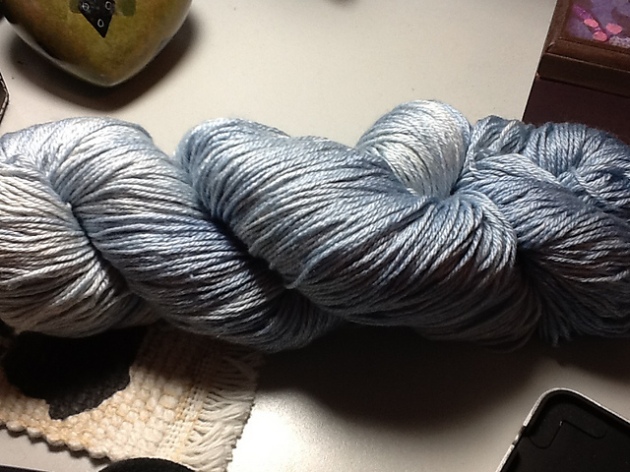 They have their own yarn line; of course a skein had to accompany me home as a souvenir.  I also picked up a couple skeins of lace-weight yarn and a few pretty painted wooden buttons.

After a warming lunch of a “jacket potato with prawn Marie Rose filling” and a pint of cider at The Camel and Artichoke, I made my way to St Paul’s Cathedral. Determined to get my money’s worth (the entrance fee is £16), I climbed all 528 steps to the Golden Gallery.

It was a bit breezy up there. The view was phenomenal.

After descending, I had calf tremors that I’ve only experienced once before: after climbing up and down the Kölner Dom (509 steps) in 1989.

Undeterred, I hit Covent Garden Market. I picked up hand-painted London t-shirts for the kids and wandered about. The buskers there are pretty amazing.

Hungry for dinner, I simply wandered around until something caught my eye. I wound up at the area’s Carluccio’s, eating chicken liver pâté and spinach ravioli. A quick search online showed me that Scoop was nearby and not to be missed. I had cioccolato fondente and amarena (otherwise known as chocolate and cherry…but that doesn’t do it justice).

Foot-weary and sated, I stumbled back to my hotel. My full day only made me eager to tackle the next one, full of plans and meetings.