Posted on May 26, 2013 by The International Knitter of Mystery

My next couple of days in London were spent doing very tourist-y things: Kensington Palace, Hyde Park, a hop-on, hop-off bus tour, the Sherlock Holmes Museum (of course!), a look at the Buckingham Palace gates (the Queen was home), and about an hour in the National Gallery.

Having slept in due to jet lag, my companion and I missed the hotel breakfast buffet. We headed across the street to a Wetherspoon’s for a full English.

The Kensington Palace tour is split into three separate tours (soon-to-be four). My companion and I followed two of the paths through the public parts of the palace. One focussed on the court of George II, and the other was a look at the life of Queen Victoria. The entrance has a light sculpture called “Luminous Lace,” which my knitter’s eye found very beautiful. 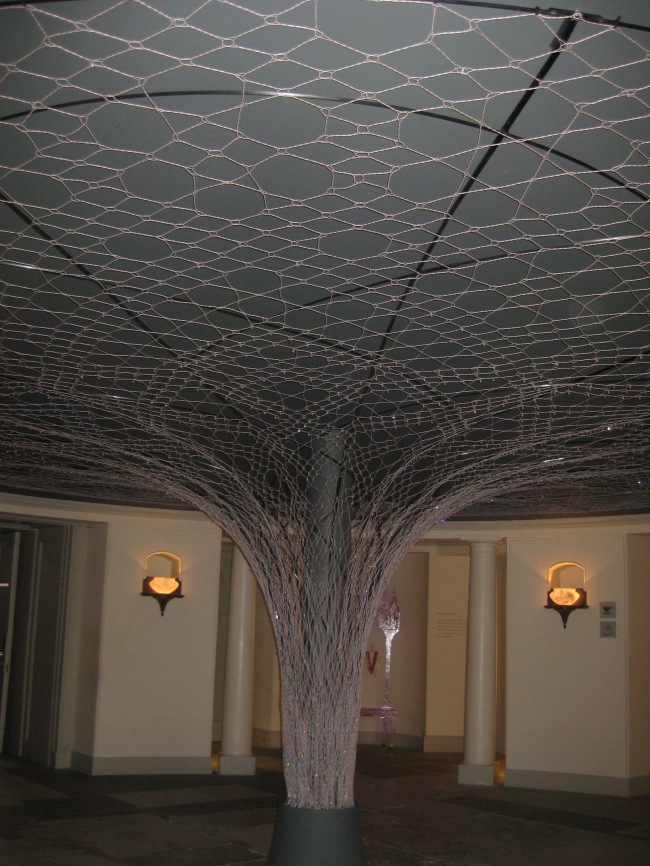 Nowhere in the US will you see a door that says this:

At the end of the George II segment, we were instructed to… 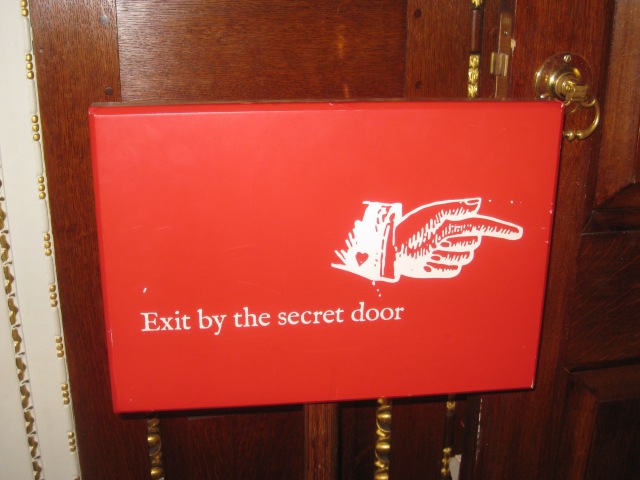 Outdoors, it was a beautiful day, and we strolled through the gardens of the palace, and a bit of Hyde Park.

We then attempted to go to the Sherlock Holmes Museum, but a large group of schoolchildren waiting to get in meant that we couldn’t. We ambled down the road to a pub on the corner, sporting this sign:

Since this sounded like our kind of place, we headed in for an late lunch. Hidden on the menu, described as “lightly seasoned and battered cod fried to a golden brown, with fried potato wedges” was fish and chips. Add a drink, and done.

The following day was a bit wet and blustery, but we persevered with our bus tour, bravely riding on the top of an open double-decker bus. We got a great overview of central London, and managed to get into the Sherlock Holmes Museum this time.

We were amused at the attempt by area businesses to cash in on the Holmes name.

As cold and wet as we were by late afternoon, we decided to have a solid hot lunch. Meat pies were had by all (though mine was a bit overdone) near Victoria Station.

Dragging ourselves back to the hotel at the end of the day, we dined on bread and cheese and fell into our beds. Just as well, as the next day, my friend was off early on a bus tour to Stonehenge and Bath, while my plans included a bike tour of central London and a climb up the steps of St Paul’s Cathedral.