Posted on March 14, 2011 by The International Knitter of Mystery 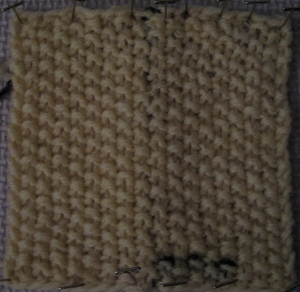 Triumph!  Swatch 3 is seamed and blocked.  The grey bits near the bottom right are where I duplicate stitched in the starting end of the seaming yarn, which is supposed to contrast with the swatch yarn.  I have never before duplicate stitched seed stitch, and this was a greater challenge than the seaming!  I have learned something valuable already.

Happy Pi Day!  No pie to be had here today, since I failed to plan ahead, as usual.  I do, however, have a package on the way from The Loopy Ewe, plus some blocking wires so I can use fewer of those darned T-pins on my swatches (an everything else).  I used to own a blocking wire set, but it mysteriously disappeared in one of my house moves.  As Mark Twain said, “Two moves equals a fire.”

1 Response to Seaming the seeds